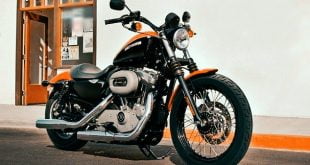 Harley Davidson motorcycles can be identified from the following numbers:

The numbers required to identify the vehicle are only ever stamped on. The raised numbers are parts numbers, which cannot be used for identification purposes.

Numbers which have been misstamped are cancelled out by means of a horizontal line, but are still legible. The proper VIN is restamped over or under the misstamped number.

In cases where either the dealer or the owner notices a mistake in the VIN, Harley Davidson will have the correct number applied by an authorised person in accordance with the rules pertaining in that particular country.

Location of the VIN Harley Davidson

From 1922 to 1969 the VIN Harley Davidson consisted of the two last digits of the model year, and one to four letters, followed by four or five numbers.

The VIN was not stamped into the frame by the works, but always only stamped onto the engine block. It was sometimes necessary to comply with the registration procedures in certain countries by stamping a number onto the frame. The VIN Harley Davidson can be identical with the engine number; its shape and appearance normally differed from that of the engine number.

During this period there was also a frame number, consisting of one letter and three or four numbers, and which was stamped directly onto the frame. The frame number does not correspond to the VIN Harley Davidson stamped onto the engine. On FL-series motorcycles the frame number was on the left hand side and on XL models on the right hand side.

From the beginning of model year 1970 chassis numbers and frame numbers became identical. The Harley Davidson VIN is stamped by hand on the right-hand side onto the unprocessed engine moulding (no level surface) and mechanically stamped onto the frame. The frame number on FLT models is on the left-hand side, except on very early introductory models, on which the stamped number was located on the central front part of the steering column head.

From the beginning of Harley Davidson model year 1970 chassis numbers and frame numbers became identical. The two first characters (a number, followed by a letter) represent the model. How they are broken down can be seen in the overview of the models in Appendix 1. The numbers ‘1’ to ‘9’ and the letters ‘A’ to ‘K’ (except ‘I’ and ‘J’) were used to stand for a particular model of motorcycle. The next five numbers were a factory serial number, not smaller than 10 000. The two last characters represent the model year, consisting of one letter and one number. For the years 1970 – 1979 this letter is an H, for 1980 it is a J. The number is the last digit of the model year.

Example: H8 stands for the year of construction 1978

J0 stands for the year of construction 1980

Some changes to the first character can however result from particular designation requirements.

The following are examples of particular initial characters:

The characters are 4 mm high and 3 mm wide. The ‘6’ and the ‘9’ can sometimes be used in place of one another.

Model designations and engine code Harley Davidson :
(broken down by year of manufacture)

The Harley Davidson engine number has 10 characters and is stamped onto the engine block, on the left. There is a star at the left and right of the sequence of characters.

The engine number can be derived from the VIN. It is the:

12th to 17th characters of the VIN = serial number

The Harley Davidson gearbox number has been used since model year 1962. The gearbox number only used on big models. The Sportster (1000 cc) does not have a gearbox number, because the engine and the transmission have the same number.

Before 1978 the Harley Davidson gearbox number consisted of one letter and three or four numbers, e.g. U1478.

Harley-Davidson does not normally use the letters ‘I’, ‘O’ and ‘Q’. However in 1982 there was a ‘BO’ series. Some of these transmissions can also   found in 1983 models. These are valid.

From 1990 the gearbox number Harley Davidson has consisted of 8 characters. The first two digits represent the model year, the next three digits stand for the calendar day and the and the last three digits represent the serial number of that particular production day. On some 1995 and 1996 models an extra ‘9’ can   found at the beginning, making the gearbox number into a 9-digit number.

Sharolyn is a young woman in her twenties, interested in reviewing vehicles and the world of engines and delivering the best image to the visitor, so that we shorten a lot of searches, by providing complete information and solving your problems that may fall into your car.
Previous What kind of Ducati engine you prefer !
Next Check your Honda vin before you buy it

© Copyright 2021, All Rights Reserved By Cariffy
We use cookies to ensure that we give you the best experience on our website. If you continue to use this site we will assume that you are happy with it.Ok