Komatsu In the absence of binding legal provisions there is no unified system of designation and placement of identification numbers and data plates!

Since nearly all manufacturers produce machines worldwide, this can, depending on the machines involved, lead to variations in these descriptions.

Komatsu-Hanomag construction machines can be identified from the following numbers:

The product identification number can be used to determine the power trains installed when the vehicle was first delivered. It is possible to do a reverse search.

N.B.:In the manufacturer Komatsu’s own internal database, construction machines are normally only listed under their serial numbers (the last 6 digits of the 17-character VIN) and the corresponding type designation.

The designation for the chassis number is not fixed due to a lack of binding provisions and a miscellany of production plants. Here, the following designations:

1Breakdown of the 11-digit VIN/PIN Komatsu

Start of 17-digit VIN/PIN in

N.B.: In the manufacturer Komatsu’s own internal database, construction machines are normally only listed under their serial numbers (the last 6 digits of the 17-character VIN) and the corresponding type designation.

See also the indication under Miscellaneous.

Breakdown of the 17-digit VIN/PIN Komatsu

Form and appearance of the VIN

Regardless of the form in which the number is placed on a machine, there is always a star at both ends.

Location of the PIN Komatsu

The VIN/PIN is stamped on and is located on the front frame on the right, seen in the direction of travel.

There is a type plate on every machine.

Location of the type plate Komatsu

2.2 Composition of the type plate

The type plates are engraved or punched on with needle point. The script is slightly depressed.
They are riveted on. The rivets used vary depending on the country of production.

The following data appear on the type plate:

3.1 Location of the engine number

3.2 Appearance of the engine number

3.2.1 Appearance of the engine number on wheel loaders and wheeled loaders

On Cummins engines the engine number has 7 characters and on Yanmar engines, 8.

Breakdown of the engine number on Cummins engines:

Construction machines use unitary keys as there are few other locks requiring other keys. Keys cannot be used for identification purposes.

Keys with the number 747 are universal keys and should only be held by qualified persons engaged in repairs to the machines.

It is possible to retrofit an optional immobiliser.

Owners of construction machines which are not licensed for use on public highways only have a so-called ‘Certificate of Conformity’ (confirmation that the machine conforms with European Directives) as proof of ownership. The manufacturer Komatsu also uses Certificates of Conformity in which merely the last 6 digits (serial number) of the VIN are listed, although the complete 17-character VIN may be stamped onto a given machine.
This may at times lead to a negative trace even if that particular machine has been reported as stolen. 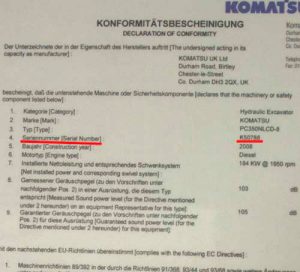 Sharolyn is a young woman in her twenties, interested in reviewing vehicles and the world of engines and delivering the best image to the visitor, so that we shorten a lot of searches, by providing complete information and solving your problems that may fall into your car.
Previous JCB
Next Kubota

© Copyright 2021, All Rights Reserved By Cariffy
We use cookies to ensure that we give you the best experience on our website. If you continue to use this site we will assume that you are happy with it.Ok